Okay, technically my furlough doesn't start until Monday. But I woke up this morning and realized that for the next 9 days, I don't have to go to work, don't have to think about work, don't have to worry about work and don't have to deal with co-workers. Really, it doesn't get much better.
I spent the morning cleaning house, which apparently no one had done since the last time I did it. Silly me. I keep expecting someone to wander in off the streets and clean my house for me. Never works. But a girl can dream.
The Belgians helped all morning. They were a tremendous help. They helped so much they wore themselves out. 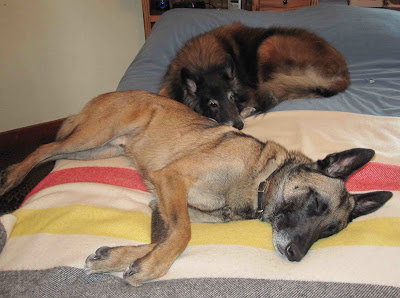 Poor Phoenix. He was so exhausted he couldn't even get his hind legs on the bed before he collapsed.
Then I made obedience trial entries for April: DeWitt, ICDOC and ABMC nationals. Yep, threw caution to the wind and entered Nix in Utility 6 times. He's green but he's got a grip on the basics and I'm not expecting 200s at this point.
Every Utility journey is different: Jess NQ'd for a couple of months (including a few shows where he NQ'd every single exercise), then went 3 in a row to finish. Connor finished in 4 trials. Over achiever. Jamie . . . oh dear . . . I showed him for a couple of disastrous months then pulled him out of the ring for nearly a year. When I started showing him again, he Q'd 3 in a row like he'd never had a problem with any of it.
Today is the Farmer's birthday. We talked about going out to paint the town tonight but decided to stay home instead. That's the kind of wild, uninhibited people we are. I'm going to cook a big supper - smoked pork chops, mashed potatoes, corn, dinner rolls and birthday cake.
Actually I made the cake last night. I'm embarrassed to admit how much is gone already. We keep testing it to see if the next piece is as good as the last. So far, so good but you can't take these things for granted.
We have a gift certificate for Iowa River Power in Iowa City, courtesy of the neighbor's daughter, so that will probably be our "night out" some time soon. When we had that blizzard about a month ago, she got her car stuck and the Farmer pulled her out. Thanks, Kate!
I have a staggering to-do list for the coming week. The next item: curl up in recliner with blanket and book.
Posted by tervnmal at Saturday, February 26, 2011