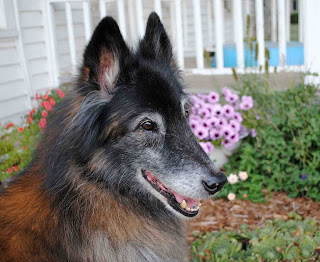 A malinois and his kitty.
The dog is posed, the cat is not. 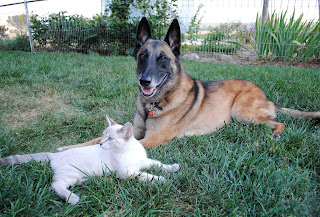 He's touching me! Make him stop! 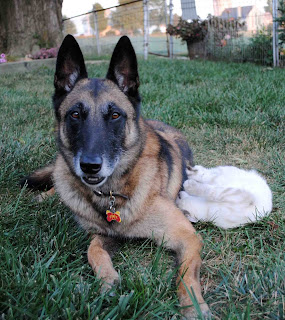 You're not going to make him stop, are you?
Fine. You will pay for this. In the obedience ring. 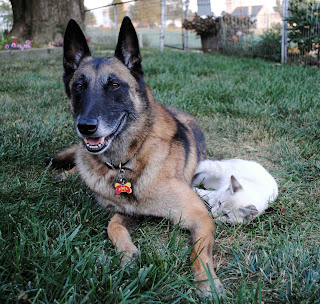 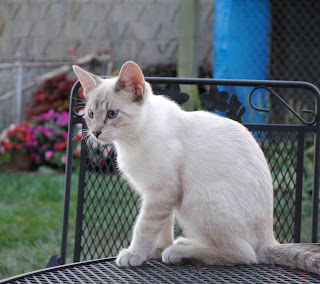 I seem to be getting pretty good at posting about nothing. It's not like my life is boring - on the contrary I feel like I'm juggling so many chainsaws that I may have an appendage lopped off at any moment. But translating that into a coherent blog post, well, you're probably better off with my "oh look, a squirrel!" odds and ends. It satisfies my pathological need to write even when there's nothing specific to write about.

Here's another random picture for your viewing pleasure. This fellow was crop dusting near our place when I left for work one morning. The yellow is tasseling corn. And you just thought corn fields in Iowa were green. 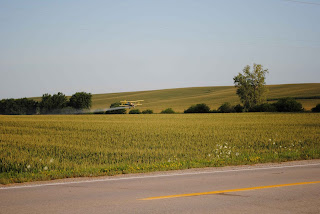 The Adorables got spayed/neutered on Tuesday. I picked them up at the clinic after work yesterday and I've never seen little cats in such a snit. But they got over it and I was back in their good graces this morning. Probably because I'm in charge of the food.

They are almost 5 months old. My vet encouraged me not to wait, since they are outdoor cats. It wasn't a matter of age but of weight, to determine how soon they could be spayed/neutered. They needed to weigh 4 pounds to have anesthesia. I weighed them on a kitchen scale before making the appointment.(Really? Doesn't everyone weigh their cats on a kitchen scale?)

Are you familiar with the "4 feet in a box" trick you can teach your dog? Weezel was an absolute pro when it came to "4 feet on the kitchen scale." He jumped up and sat there like he'd done it all his life. He could have a performance career. Gryphon was an gawky teenager with 4 feet going in 4 different directions. And Siren? Did you know it's physically impossible to make a cat put her feet down if she doesn't want to?

The huge line of scabs from Phoenix's barbed wire fence encounter earlier this month has fallen off, showing lots of healthy pink skin on his leg. No word on if the hair is going to grow back. He needs a bath and blow dry before next weekend's big show cluster. There's one more thing to add to the to-do list.

I'm psyching myself up for a cholesterol test next week. Even though my numbers are normal, apparently that isn't good enough for my cardiologists because he has deemed me "not normal." (He seems to take great delight in pointing that out.) He says he would like to see the numbers lower because of my a-fib. Ha. There are a lot of things I would like to see, too. I've spent the last six months working on a low fat, high fiber, step away from the fast food, go easy on the red meat, get lots of exercise and lose a little weight lifestyle. If that doesn't do it, I give up. Bring on the meds and gimme a donut.

I've been to two wonderful seminars in three weekends and would love to write about them but that requires time and THAT seems to be at a premium lately.

I know. Excuses. Excuses. Work is getting me down. Plus making Phoenix's training a priority, which brings me back up. And a ridiculous amount of time spent walking-walking-walking and trying to vanquish the looming specter of having to take cholesterol lowering meds, plus a ridiculous number of doctor's appointments in the coming weeks to deal with an entirely different issue. So I'm going to use those excuses for not posting more often.

So instead, here are pics of the Farmer mowing hay. I have to be honest. This is second cutting hay, back in July. He is currently making third cutting hay, which is not quite a lush and green and lovely because it hasn't rained here for a month.

So imagine this is copy full of insightful observations about the seminars. Or just enjoy pics of a guy driving a green tractor pulling a green hay mower through a lovely field of green hay. 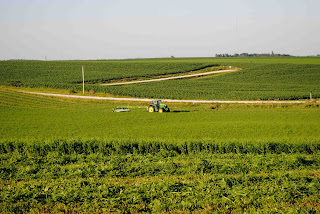 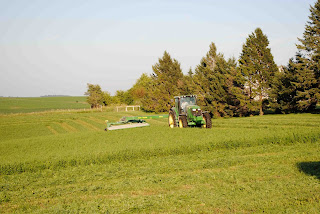 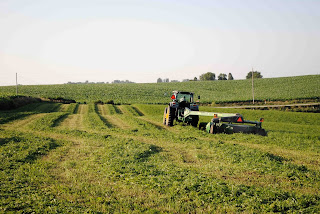 I am a bad dog mom. Jamie turned 14 in July. I never got around to taking his birthday picture. So last night, one woman, two Belgians, three kittens and an adult beverage went outside to take the birthday picture.

As you may notice, this is a collection of kitten pictures with occasional appearances by Phoenix. With the exception of the first frame, Jamie isn't in any of them. Bad dog mom. Bad. bad.

This first frame represents the kittens' mission in life: sit on the patio table and wait for the dogs to walk by, then try to grab them. They're really not very good at it but they keep trying. 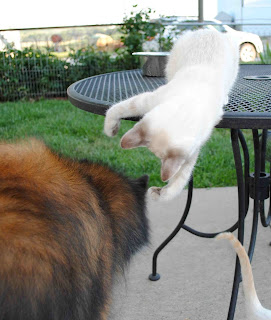 Reach out, reach out and  . . . step on someone.
Really, if grabbing doesn't work,
just walk on them as they go by. 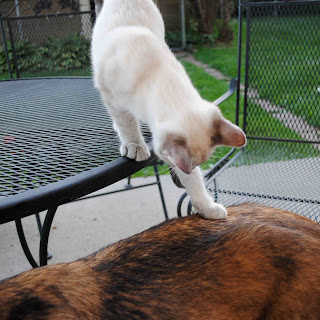 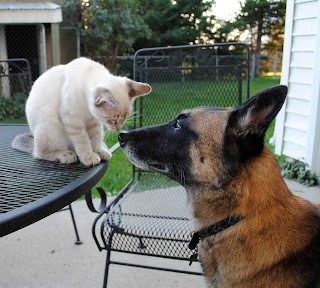 Triskele.
(Followers of Celtic art will get it.) 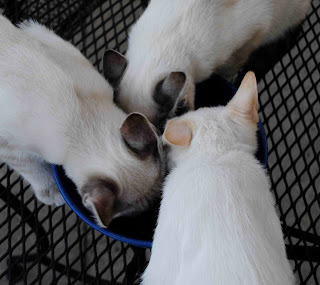 Bubbles? Yeah? So?
Phoenix is insane about bubbles.
Gryphon and Siren were not enchanted. 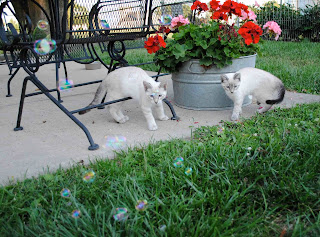 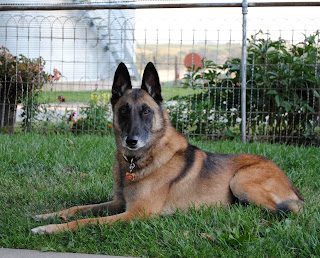 It's okay to say ouch

While out for a walk last week, Phoenix flushed a rabbit. The rabbit bolted straight through the nearby barbed wire fence with Phoenix right behind him. The whole thing happened in about 2 seconds. I called Phoenix and he came back. The rabbit disappeared into parts unknown. I helped Phoenix through the fence and checked him over.

He seemed no worse for the wear. I ran my hands over his belly and up and down his legs. No blood. No pain response. In fact, the only reaction I got was annoyed impatience. I had interfered with his hot pursuit of the rabbit. If I was determined to ruin his fun, could we at least get on with the walk? We finished the walk, hung out on the patio for awhile to cool off, went in the house, got ready for bed and he cuddled on the bed while the Farmer and I watched the 9 p.m. news.

Next day, I kept an eye on him. No limping. No apparent sore spots. No persistent licking of odd places. I thumped him all over and he leaped around, acting like his normal idiot self. My industrial springs and steel belted radial dog had once again defied the odds. I did not roll him over to re-check his belly. There didn't seem to be any point.

Over the weekend, we went to an obedience seminar. Although he’s too big to do it for very long, I often let Phoenix hang out and sit on my lap. He was flopped on his side, slowly putting my legs to sleep, and I was scratching him idly on the tummy and chest.

That’s when I found the first cut - a long, scabbed gash under the fur on his belly. Further inspection revealed another jagged cut reaching down from his from elbow on the backside of a front leg and another wicked slice in an armpit. All were scabbed over hard with no redness or heat or swelling. They were located in places you would never see unless you deliberately looked. The barbed wire fence had claimed its pound of flesh after all.

That night at the motel, I soaked away the dried blood and had a closer look. The tears were ugly but superficial and appeared to be healing fine. My poking and prodding got no reaction from Phoenix except a look of annoyance that I was getting him all wet.

Me: Why didn’t you tell me?

Phoenix: Tell you what?

Me: That you got hurt! Typical man.

Me: Are you freaking serious? All over your belly and front legs. From going through that fence the other night.

Phoenix: Oh. That. No big. Wanted the rabbit.

Me: It freaked me out when I found all that scabby dried blood today.

Me: You’ll  probably have scars.

Me: You know, it’s okay to say ouch when you get hurt.

Phoenix: Cuz you say it enough for both of us.

Me: You have a point.

Phoenix: You’re kind of a weenie.

Phoenix: And you’re funny. You say funny things when you get hurt.

Some friends and I have a favorite saying: you can’t fix stupid.

SueAnn and I were training at the Amana Park last week. We had jumps and ring gates set up and were enjoying a pleasant summer evening. An older woman drove her car right up to where we were training and rolled down her window. She had a schnauzer on her lap. SueAnn went to talk to her. The woman said she wanted to let her dog run, were our dogs friendly?

SueAnn told her we were training our dogs and asked that she please not turn her dog loose here. The woman drove away . . .

. . . about 50 yards and turned her dog loose. It was a yappy little thing and of course it ran straight at Disco and Phoenix.

SueAnn yelled, “Call your dog! You need to get your dog on a leash.”

The woman started calling the dog, which ignored her. Imagine that. She was puffing on a cigarette and could barely walk. The dog kept coming closer and closer, yapping and posturing like only small dogs can.

Woman said, “I just had a hip replacement, I can’t walk very fast.”

Which begs the question, what are you doing out here, on rough ground, without a walker or cane? Why not walk in town, where there are nice smooth sidewalks?

Woman said, “Don’t worry about him. He just wants to play.”


Seriously? Is this scripted or what? How many times have I heard that? And why do people who say that never notice that the other dogs involved do NOT want to play?

Phoenix was snarling in a sit. Even Disco, who is usually 70 pounds of good tempered boxer, was not amused. The schnauzer continued being a yapping idiot. Woman was very, very, very slowly walking toward us, puffing on the cig the whole time and yelling at the dog.

Finally, SueAnn grabbed the dog and held it with one hand and Disco with the other. Woman finally got there and put the leash on the dog. Of course it was a Flexi.

The woman turned to walk away, the dog zipped out to the end of the line, pulled her off balance and she FELL OVER!

I figured she probably just broke her OTHER hip and was having visions of calling 911 and there goes our training session, not mention one of us is going to have to take care of that damned dog until we can find a family member or neighbor to take it.

Woman yelled, “I’m okay, I’m okay!” (Really? I don’t think so.) We put our dogs up and went to help her. She didn’t want any help. She said she could get up by herself. She couldn’t.

SueAnn held the fiercely yapping schnauzer. I helped the woman get up. She got the dog, got back in her car and drove away.

Did I mention she never dropped her cigarette?

I am pretty sure this is the same woman I had encountered previously while training at the park earlier in the year. She and a friend drove up with little dogs on their laps and asked if my dog was friendly.

Oh. We want to turn our dogs loose. Would he bite them?

Um. Yeah, he would. Please don’t do that.

That time they drove away.