Several people have asked me about Banner's name. So here we go.

I only know one other canine Banner. He is a malinois who belongs to Phoenix's breeder on the West Coast. I thought the dog (and the name) were cool when I met them 7 years ago and the name has been bouncing around in my head since then. I believe Catherine's Banner was born on July 4 and was named after the "Star Spangled Banner."

I like literary names for my dogs - anything tie in with book characters, book titles or the print news media. My very first dog was named after a character in a Little Golden Book, "The Poky Little Puppy." And so it goes.

Are you familiar with the concept of banner headlines in newspapers? They're the sort of thing that if you do them, they kinda need to be correct.


"Dewey Defeats Truman" was an famously incorrect banner headline on the front page of the Chicago Tribune on Nov. 3, 1948, after U.S. President Harry S. Truman won an upset victory over challenger and Governor of New York, Thomas Dewey. Sometimes it really is a good idea to verify your facts.

Other banner headlines make you wonder what the editor was drinking. Although some days the newsroom is like that . . .


Banners are traditionally made of cloth and proclaim a heraldic status as it relates to a family, clan or tribe. This is a very fine banner.


Banner the Aussie is pleased to be named for the banner men of House Stark in the Game of Thrones. Not a GoT fan? Grab the first book, pull up a chair and cancel your social engagements for the next six weeks. Or you can just catch the series on HBO, which includes a lot of really gorgeous costumes that the characters spend a lot of time taking off.


Banner looks nothing like a direwolf, even though one of his ears has totally gone whackadoodle at the moment.

An update from the zoo

Reports of my death have been greatly exaggerated.

Several of you, gentle readers, have expressed concern that I had dropped from the face of the blogosphere.

Thank you. I appreciate it. I've had a frustrating lack of time to post lately.

Not to put too fine an edge on it, but work the last couple of weeks has left me not wanting to even look at a computer when I get home, the Farmer keeps finding all kinds of things for me to do to help him (he thinks he's helping me de-stress from the office) and the Belgian/Australian contingent takes up every remaining waking moment and a few sleeping ones, too. Then there's the matter of meals, laundry, groceries . . . I need a house elf!

Banner is 4 months old now. I would love to write about his training and all the stuff he's learning (and I will) but on a cool breezy September afternoon, it's more fun to sit in the yard with a camera. (More fun, but decidedly less safe.)

Over Labor Day weekend, I showed Phoenix in veterans and working sweepstakes at the ABMC regional at the Five Seasons Cluster in Amana, Iowa. It was his first (and honestly, probably last) time in the breed ring but it was fun.

By the time we were done running around the ring and up and back across the ring, Phoenix had decided that in spite of the judge holding her hands centered against her body as we returned to her, she really did not want him to do a front.

HUGE thanks to Sheryl McCormick and her mad photography skills for capturing the moment. The Skinny Li'l Dog cleans up pretty well.

We're back in my comfort zone (the obedience ring) for the rest of the fall. 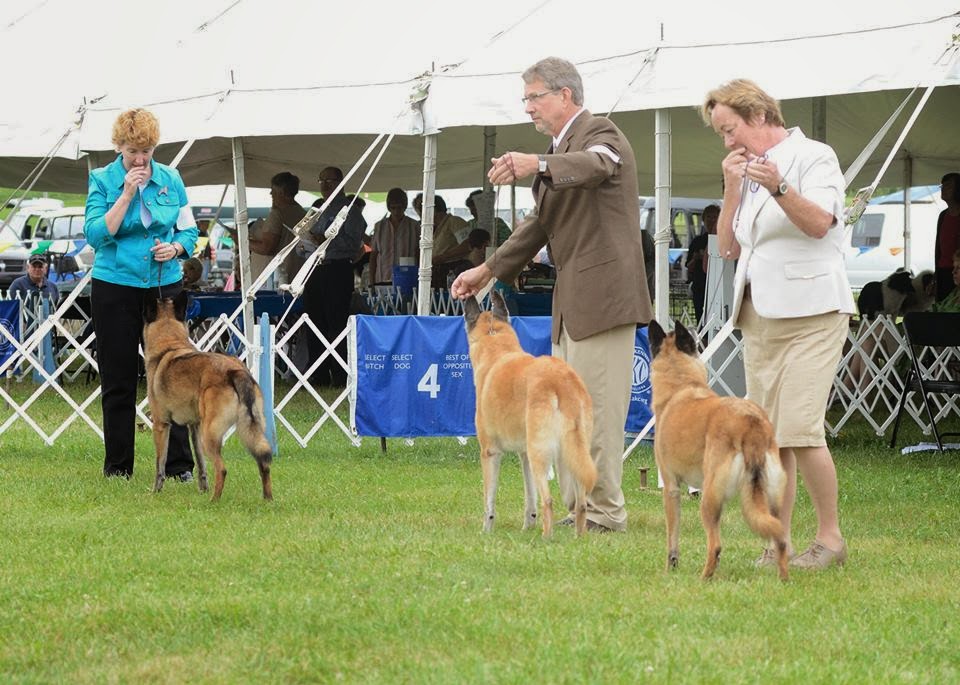 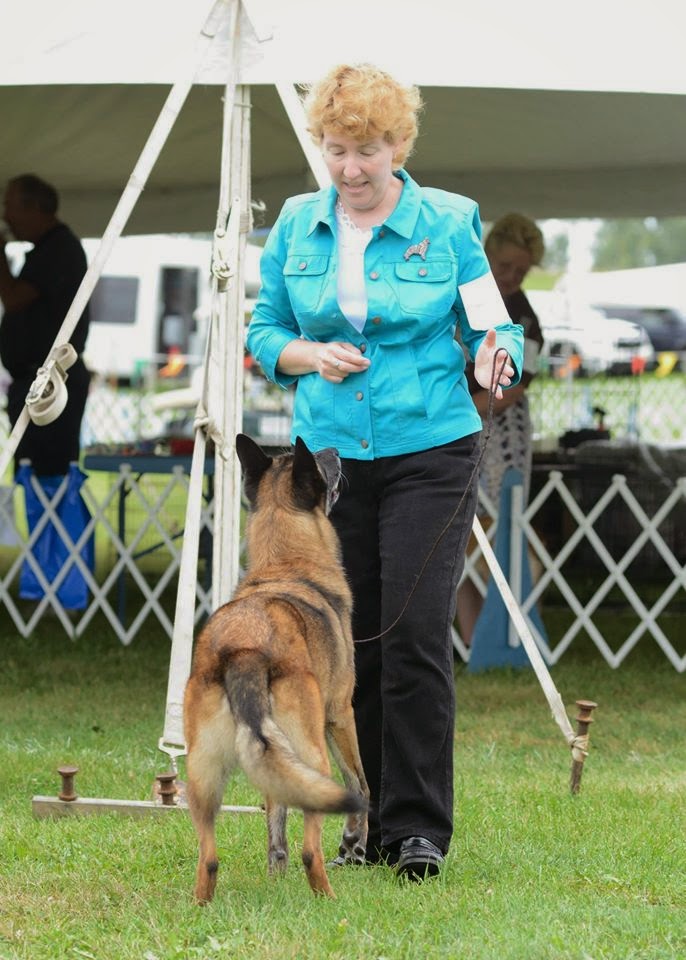 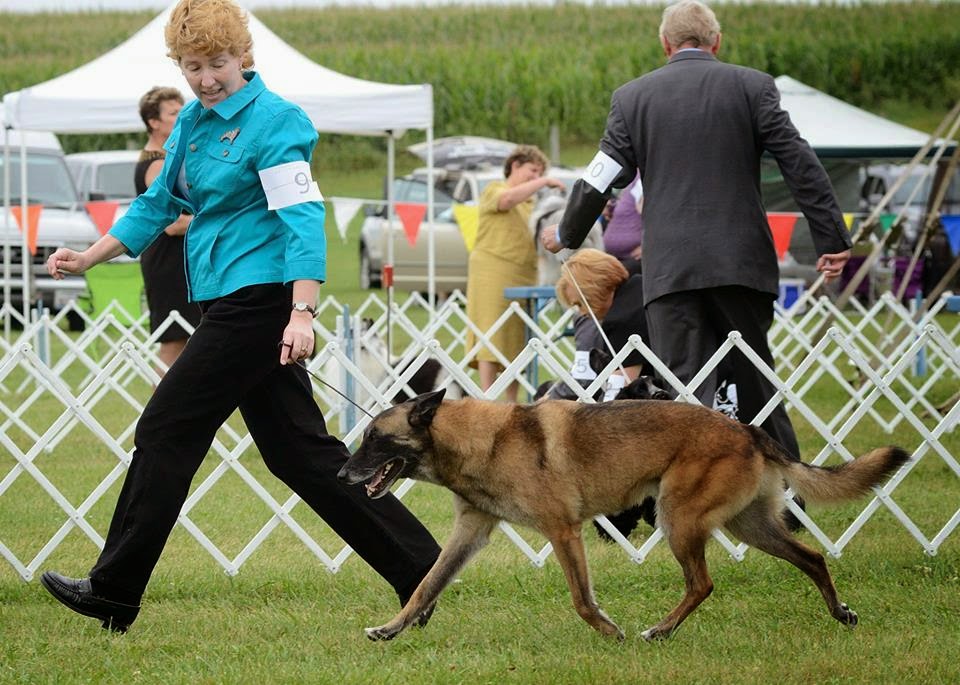 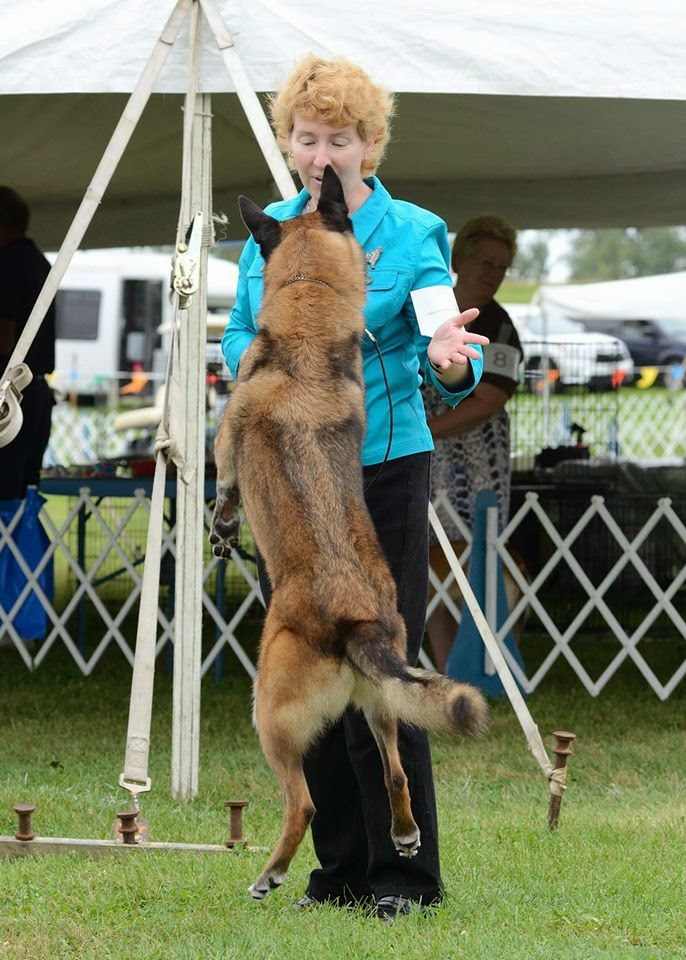 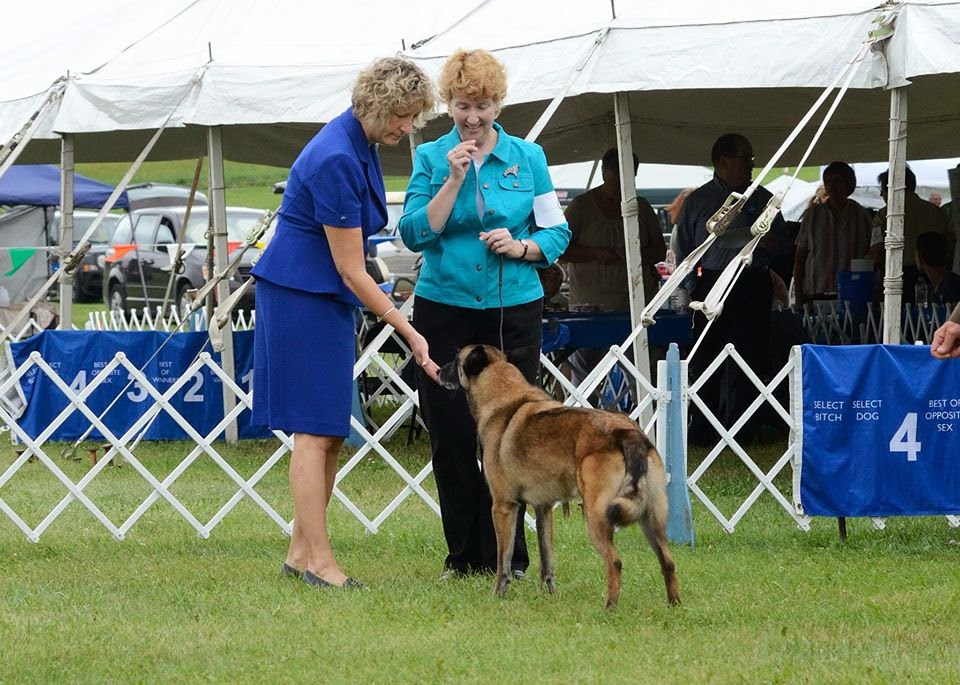 You CAN fix anything with duct tape

When I got my first sheltie, Jess, I had no idea you had to do stuff to Sheltie ears to keep them from sticking up. So I didn’t. And they did.

By the time I got Connor, I had wised up and spent the next 11 months being crafty with moleskin and duct tape to ensure a perfect ear set. I got lots of help from people who actually knew what they were doing and in spite of numerous false starts and discombobulated efforts, Connor’s ears didn’t turn out half bad.

This might not be a marketable skill but I was proud of my ability to hold a squirmy puppy while adhering ear braces that would not only last longer than it took to put them in but perform well enough to ensure the puppy’s ears were well set on his head and properly tipped. I could usually get an ear brace to last at least a week, depending on which dogs Connor got to play with during that time. He had one PWD friend who specialized in ear brace removal.

When I got the Belgians, ear worries generally went out the window. I spent Jamie's and Phoenix’s puppyhoods watching their ears flop this way and that, then miraculously overnight, spring upward and stay there with no assistance from me.

By the time Banner arrived, I had happily retreated into ear oblivion, only to be snapped out of it by people repeatedly asking me if I was going to “do his ears.” I hadn't really thought about it. Accidentally. On purpose.

When one of my blog pics showed Bann’s ears flying around at oddball angles, his breeder tactfully suggested I needed to “do ears.” Sigh. It was time to dust off yet another one of the skills that would leave the Farmer scratching his head and saying, "You're going to do WHAT?"

Banner may or may not have a breed ring career. It's not my first priority but you never know where life will lead. I didn't want to look at him at 16 months and think, geez, wish I'd paid more attention to his ears when he was little. Obedience trainers often suffer enough guilt over things gone wrong without adding ear remorse to the list.

Debi had shown me the accepted method of taping Aussie ears and let me tell you, it looked a darn sight easier than the engineering schematic for bracing sheltie ears. It basically involved one long piece of duct tape running from the inside of the ear leather under the chin up to the inside of the other ear leather. How hard could this be? I got out my duct tape and got to work.

Fifteen minutes later I had duct tape stuck in a variety of places on my skin, my clothes, the kitchen table, the kitchen floor and in Banner’s ears. In the latter, it was actually some semblance of where it belonged. I admired my handiwork. All right then.

Banner gave me a baleful look (I would say a hateful  look but he is entirely too sweet of a puppy for that) and immediately started trying to remove the duct tape. I must have done a pretty good job because that tape job stayed put. When it finally came out, days later, his ear set was very pretty but the inside of his ear flaps were full of sticky duct tape gunk that defied being removed. Well, yuck.

Having been cautioned to keep his ears braced during the teething period (which is amping up into full chomping mode as we speak) I decided I would try gluing them next. Surely that would be easier. And much tidier. No icky, sticky duct tape residue. What could go wrong?

Having procured a bottle of Tear Mender glue, the label of which assured me it was “Fast Drying!” I plopped Banner in the Farmer’s lap with admonitions to “Hold the puppy” and set to work. The object was to glue the tips of his ears to his cheeks to ensure the ear leather was shaped downward, not sideways.

It soon became evident that directions to “Hold the puppy” were subject to the same loose interpretation as those to “Watch the puppy.” Banner was doing his best to present a moving target and the Farmer seemed to think that as long as the two of them were occupying the same chair, this constituted “holding still.”

By some miracle (probably the element of surprise) I got Banner’s first ear glued to his cheek without too much fuss. I was admiring my handiwork when I realized, with sinking heart, that now I had to get the other one to match.

I am not good at getting things to match. Trimming ears on my shelties and Jamie was a process that involved a great deal of lip-biting and critical scrutiny while the dogs tried to retract their ears into their skulls. I could trim one ear to perfection, no problem. Getting the other one to match was something else. This often involved trimming “just a little bit more” and “no, wait, just a little bit more,” until the ears in question looked like they were belonged on a ROTC recruitment poster. I never trimmed ears the night before a show. Never. They usually needed at least a week to grow out.

By now Banner was getting impatient, the Farmer’s puppy wrangling skills were getting worse and my aim with the glue bottle left a lot to be desired. Within minutes, I managed to glue Banner’s other ear appropriately. Yay for me! I had also glued my hand to his ruff, glued the Farmer’s T-shirt to the chair and administered a glob of glue to the outside of Banner’s ear for reasons unknown.

This "set" lasted for six days. A merry romp with a litter brother over the weekend freed one ear tip from its sticky confines and a malinois-induced wrestling match took care of the other one the next day. Again, Bann’s ears look lovely  . . . if you can ignore the big wad of gluey cheek fur attached to the inside of one ear tip. And the bald spot on the outside of the other ear where I finally brushed out the residual glue deposit.

I am totally over gluing ears.

We’re going back to the duct tape.
Posted by tervnmal at Wednesday, September 03, 2014 3 comments: