A weekend at home

I stayed home over the weekend. Can you believe it?

Well, not totally at home. Saturday we went to Kay's and trained. Sunday, I planned to go to the Amana park and train but it was raining. So we went to the old barn in Amana where they hold the farmer's markets. We train there a couple of times a year. It's a good place to go when the weather is not cooperating.

The barn foundation is made from sandstone. The structure dates to the mid-1800s. 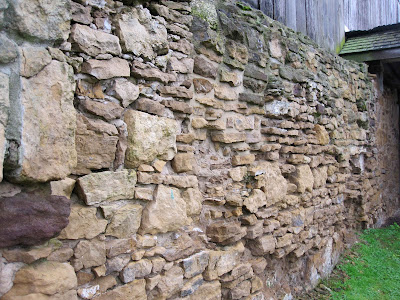 Another view of the barn, showing the sandstone foundation. 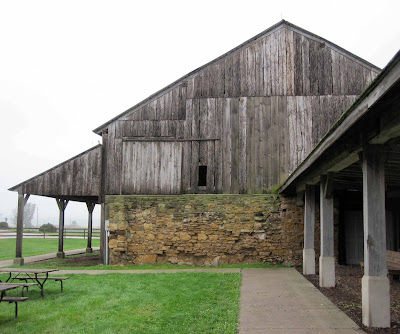 Here's where we train. Nix is sitting at the far end. It's an awesome place to work heeling, recalls and retrieves. Plus there are endless opportunities for Figure 8s around all the poles. Plus the floor is sniffy-good wood chips, so lots of chance to reward/correct for working through distractions. 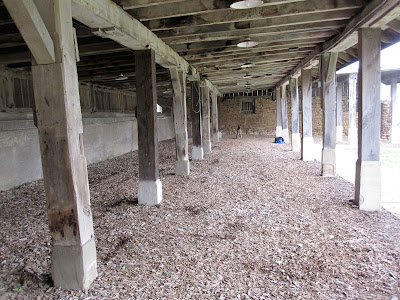 After we trained, we went for a walk. In the rain. It wasn't raining that hard. The dogs didn't care and I didn't figure I'd melt. There's a paved trail around the Lily Lake so we didn't slide around in the mud. Here are the dogs with the Lily Lake behind them. 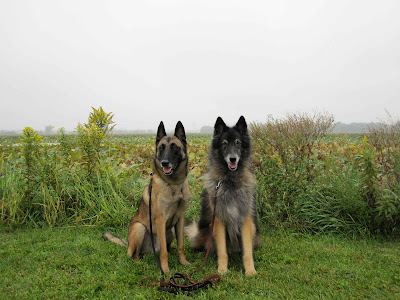 The Lily Lake is a man-made lake between Amana and Middle Amana. It is covered with water lilies. They bloom in the summer and are really pretty. Of course, I never think to stop and take a picture of them in the summer when they're pretty. I wait until mid-September when they're getting brown and crusty. 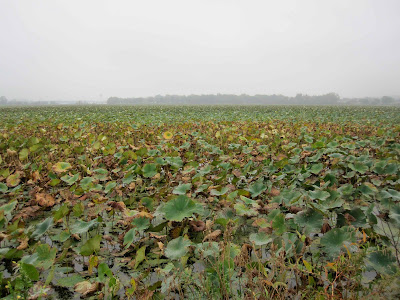 One section of the trail goes across a levee between the mill race and the Lily Lake. The mill race connects six of the seven Amana villages. The folks who settled the colonies transported stuff from one village to another via the "race." 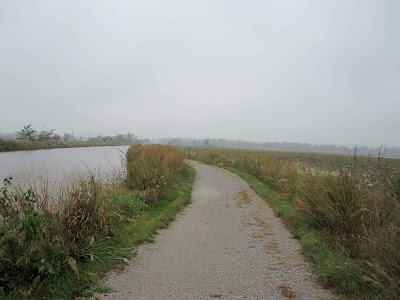 Here's another section of trail. We walked for 45 minutes and had it all to ourselves. Maybe that's because it was raining. Ya think? 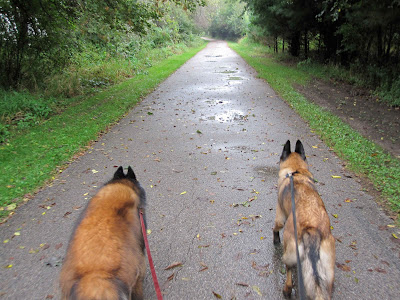 It was a nice, relaxing weekend. Now we can get psyched up for two weekends of agility, including the big camping fest of the year at Granger this weekend. Rain, rain, go away!
Posted by tervnmal at Monday, September 20, 2010